I always find it a bit mysterious how the sound / music I make for a piece of dance forms itself. A lot of the early stages consist of me making things and then waiting for those things to make connections with other bits of sound or with movement and thus finding their place in a piece. In the case of ‘I Live In It’ I had some free time before the project officially started and I decided to spend some of it making a library of musical materials that I could bring in to rehearsal. I didn’t know what the rehearsal process would turn out to be like yet and I figured so much of what we made and how the making process would unfold would depend upon the people who took part, so I just launched out on making bits of sound with the idea of gratitude to our bodies kind of hanging around in the air somewhere in the hope that it would make me gravitate towards sounds that fit the project.

Having a pre-prepared ‘library’ of potential sound material for a project means that from the very start I can try things alongside movement games or devising exercises and get a feel for what kind of sounds will fit this particular group of people and the movement material they’re coming up with. I can always go away and change the sound or make new sounds to suit the project more if I need to, but having sound that might form part of the piece there from the beginning also means that the sound can influence the development of the movement as well the movement affecting how the sound gets shaped and moulded. As the project evolves I think this happens some of the time in a form of sound / movement osmosis rather than things being too consciously chosen – I like the way this seems to give a feel in performance of the sound and the movement being quite organically linked. It means too, that the people dancing alongside the sounds I make become accustomed to the kinds of music and sounds I compose quite early on in the process, rather than just being presented in the last few rehearsals with something that might be quite different from what they were (perhaps unconsciously) expecting. Similarly it means that the people making and dancing in the piece and I come to know and trust each other more than if I simply turned up from time to time and then presented a sound score towards the end. It’s difficult really to prove it, but I do have a feeling when I work in this way that there is a greater sense of connection between the sound, the movement and the people who are dancing it.

I also liked the idea of somehow making some of the sound with the people who would be taking part in the piece, whether this would be ‘pure sound’ or spoken text. We tried a few things in rehearsals that either used vocal sounds or spoken texts and I often recorded discussions the group members had or the sound of activities they were engaged in during the workshops in the hope that there might be some bits from that I could use in the piece. So in the end we used a selection of specifically recorded spoken ‘praise poems’ to the body that people had written, along with bits of conversations that people had had in small groups around the themes of the project and also some ‘vocalisations’ that came out of a session we did with everyone one afternoon, with different people conducting the group in making short repetitive phrases of vocalisation or speech that accompanied a movement. I had originally thought that we might use something like this live in the piece, but as time passed it felt that there was so much to investigate with the movement that it would be better to use recorded examples that I could then manipulate using music software. There was one particular section in the final music that featured some of the ‘pure vocalisations’ that I’d recorded and also one of the participants Sarah saying ‘Bah Humbug’ in a way that had a lovely musical phrasing to it. I took this material and put it through a processing tool called a resonator, which emphasised the musical pitch of the sound and layered it along with other sounds that I had made myself. The result felt like a really nice distillation of both the actual sound that had been made by Sarah and the group, but also of the processes we’d used to arrive at it. (The original sounds in this case had come from a sound and movement exercise that had come out playing with sounds that your body might ‘say’ or ‘vocalise’). In the final piece the audience might have no idea of where the sound had originated, but it felt to me (and I hope to the audience) that the sound had a kind of indefinable integrity and relationship to the performers and to the theme.

One interesting decision that I came to make in the later stages of the project was that rather than producing a finished recording of the music / sound I would prepare the different layers that made up the piece and trigger them live using a piece of music software called Ableton Live. This had two advantages, it meant that timings could remain flexible and rather than the group having to worry about meeting appointments in the sound score, I could cue specific events to the movement as it happened at the pace that felt right for the performers in performance, (this felt particularly helpful in a piece where the dancers had such a wide variety of physicalities and where some sections had quite an improvisatory structure). There were some lovely coincidences that we had I think, all grown attached to between the sound and the movement and this meant I could reproduce them in the performance. Conversely, it also meant that there were layers or events in the sound that I could place in a different relationship to the movement every time we ran the piece. This seemed to keep a freshness and aliveness to the performance. In particular there was a section that was danced along to the ‘praise poems’ to different parts of the body I mentioned earlier. The movements often related to particular parts of the body too, but the different timing live of these poems in relation to the movement meant that there was a lovely sense of  ‘perfect fit’ and juxtaposition between the body parts mentioned in the soundtrack and those used or referred to in the dance that changed every time. 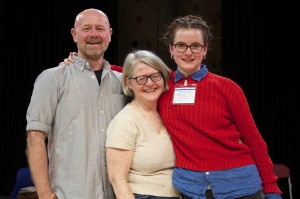