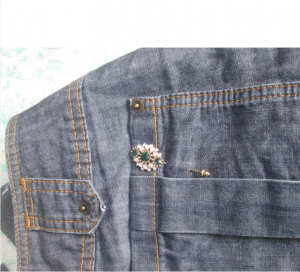 The performance of I live in it took place on March 17th as part of the International Women’s Day celebrations at Mulberry School for Girls.   We had a good audience – about 60 people from the school and about 25 others.   We had about 30 of these bejewelled hijab pins in the black curtains at the back of the stage. At the end of the piece each person touched four places on their body which reminded them of a story they had thought about or shared. We really thought about the quality of the touch, a slap, a gentle prod, a warm open hand…they were all there.   We all had  a partner, and at a certain point our partner went to collect a pin for us from the curtain, and when they arrived we pinned it onto one of the places. This is mine, pinned to a pocket just above the place where I have a tattoo.  I got the tattoo in Ilfracombe, needing to mark something that had happened but that was quite invisible.   I never told this story in the group, as many stories were not told verbally, but indicated through these varied touches.  My 14 year old partner always wanted her jewel placed on her sleeve, indicating where she once broke her arm. She’d been resting on the floor in the gym after a boxing bout, and her dad dropped the weights he was lifting on her arm. She bore him no ill will.  When we reflected back on the performance some audience members said that this was the point at which they felt most emotional, when our incredibly varied group of women were gently and respectfully giving each  other a gift.   And gift giving and receiving is very important in the world of understanding gratitude.   I am searching my memory for the name of a tiny tribe whose whole identity depends on finding people willing to accept a gift from them. The gift giving begins a chain of connection which keep community alive. Any anthropologists out there  who know- tell me!